A little bit of a background

Since 2013, InText Translation Company has been the organizer of an international translation conference in Ukraine – UTIC. Two previous events, in 2013 and 2014, drew 300+ industry professionals from all around the world to the capital city of Kyiv. In the summer of the last year, UTIC was given a comprehensive makeover: InText proposed a completely new format for the conference and changed its name to UTICamp. What is UTICamp? It is a real campsite in a coniferous forest on the bank of a tributary of the Dnipro river, where professionals from Europe, the US and Asia got together with local experts to discuss the industry’s hot topics and share translation and localization experience. 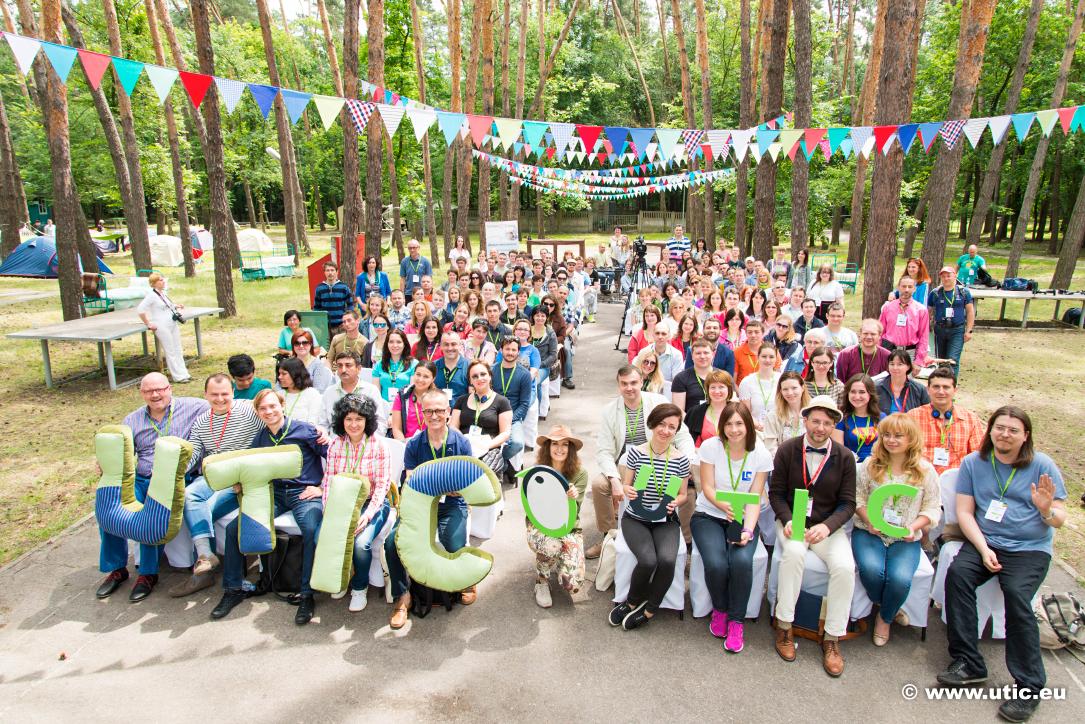 A colorful and “airy” conference hall provided some inspiration at the opening ceremony.

How did the organizer come up with this idea?

The man behind the Ukrainian Translation Industry Camp, InText CEO Stanislav Kalenyuk, is an experienced conference-goer who has become slightly tired of the familiar way in which such industry events are organized. You may also know that feeling: no matter where and by whom they are organized, they all take place in hotel halls with stuffy and closed conference rooms, interspersed with coffee breaks.

Somewhere at the back of his mind, Stanislav had always dreamt of participating in a conference held in the open air where you could walk under the trees and take a moment to relax amongst beautiful scenery between the presentations and speeches. 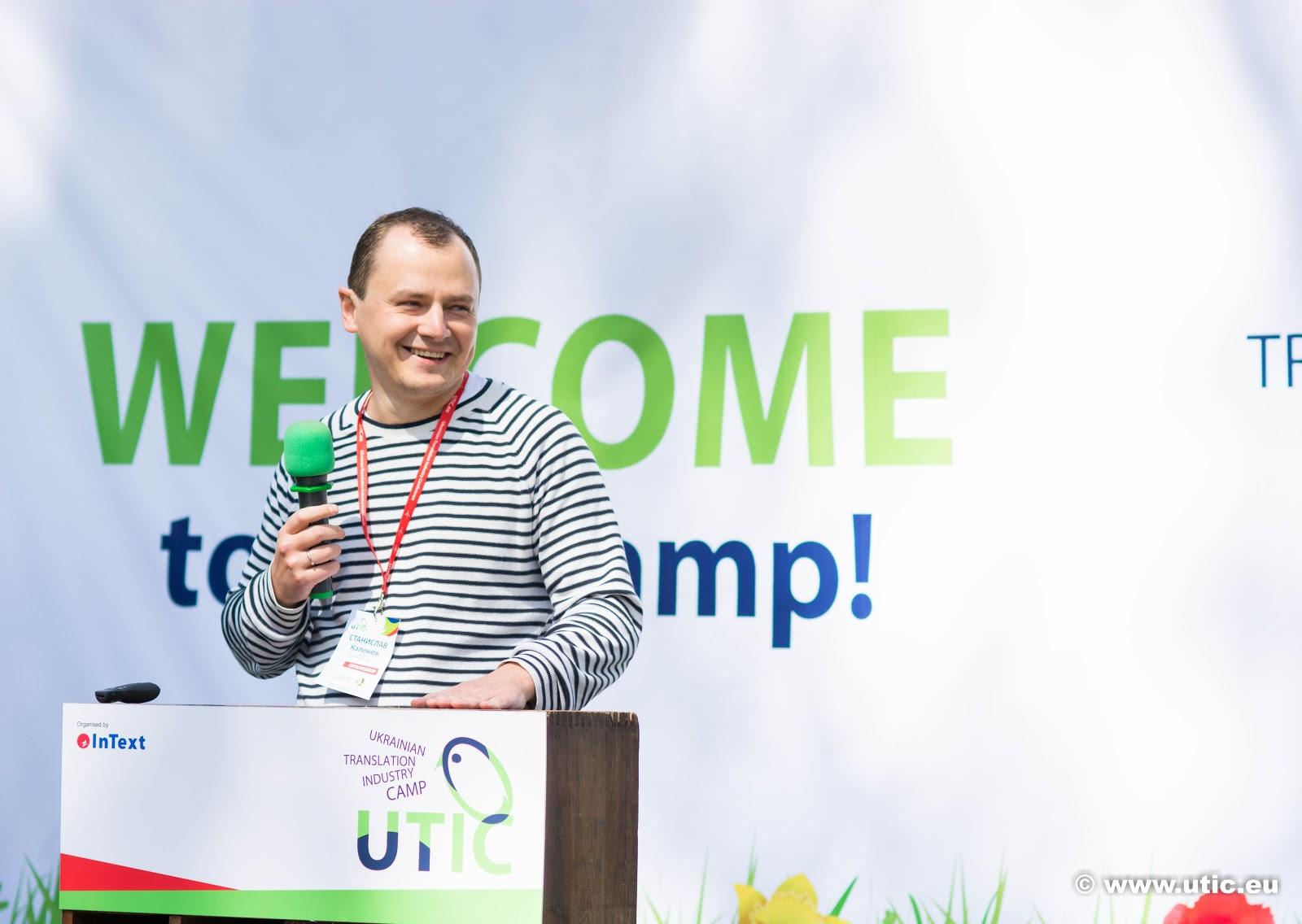 Some say that people should keep their home life and their work life separate. They may be right…or maybe not. But there is probably nobody who wouldn’t be delighted, after a day full of fruitful discussions and good networking, to immerse themselves in a warm family atmosphere and relax while playing with their children or resting with their spouse by a campfire. Inspiring, isn’t it?

Stanislav Kalenyuk himself is a happy father of three and a caring husband. He has always missed his family when traveling on business and attending events all over the world. None of these events assume that attendees will be accompanied by family members or provide a separate agenda for them. So one day Stanislav decided to go ahead with his vision and added an important idea to the UTICamp concept: from now on, any conference attendee could bring his or her family to the conference venue and spend the conference days close to them. As some attendees come from different regions or even countries this is an additional attraction, enabling them to combine participation in the event, spending time with their family and traveling.

Living our lives in a hectic business environment, we sometimes forget the important things. So Stanislav thought, if there is no industry event organized in this way, why couldn’t he be the first to do it? The InText team was also inspired by the whole idea and warmly supported it. As a result, UTICamp-2016 offered an opportunity to participate in an industry conference while looking around, enjoying the scenery and spending time with the family.

The venue was then selected. For three summer days the Meteorite camping site on a spectacular riverbank near a traditional Central Ukrainian village became the heart of the translation industry. But at the beginning of 2016 the site had no Internet, no reliable power supply and only very modest amenities, with little more to boast of than the natural beauty of an abandoned sports camp from distant Soviet times. Guided by his clear vision, Stanislav and his team started to make his idea a reality. Everything had to be done from scratch…

The result of the InText team’s hard work was surprising. Think of a sports camp from a bygone era, hidden in a wild forest, but at the same time equipped with all modern amenities! Electricity and Wi-Fi, a comfortable camping area, shower stalls with hot water, a kitchen equipped with every modern utility, sunbeds on the beach and jetty for taking a rest between speeches, and much more besides! 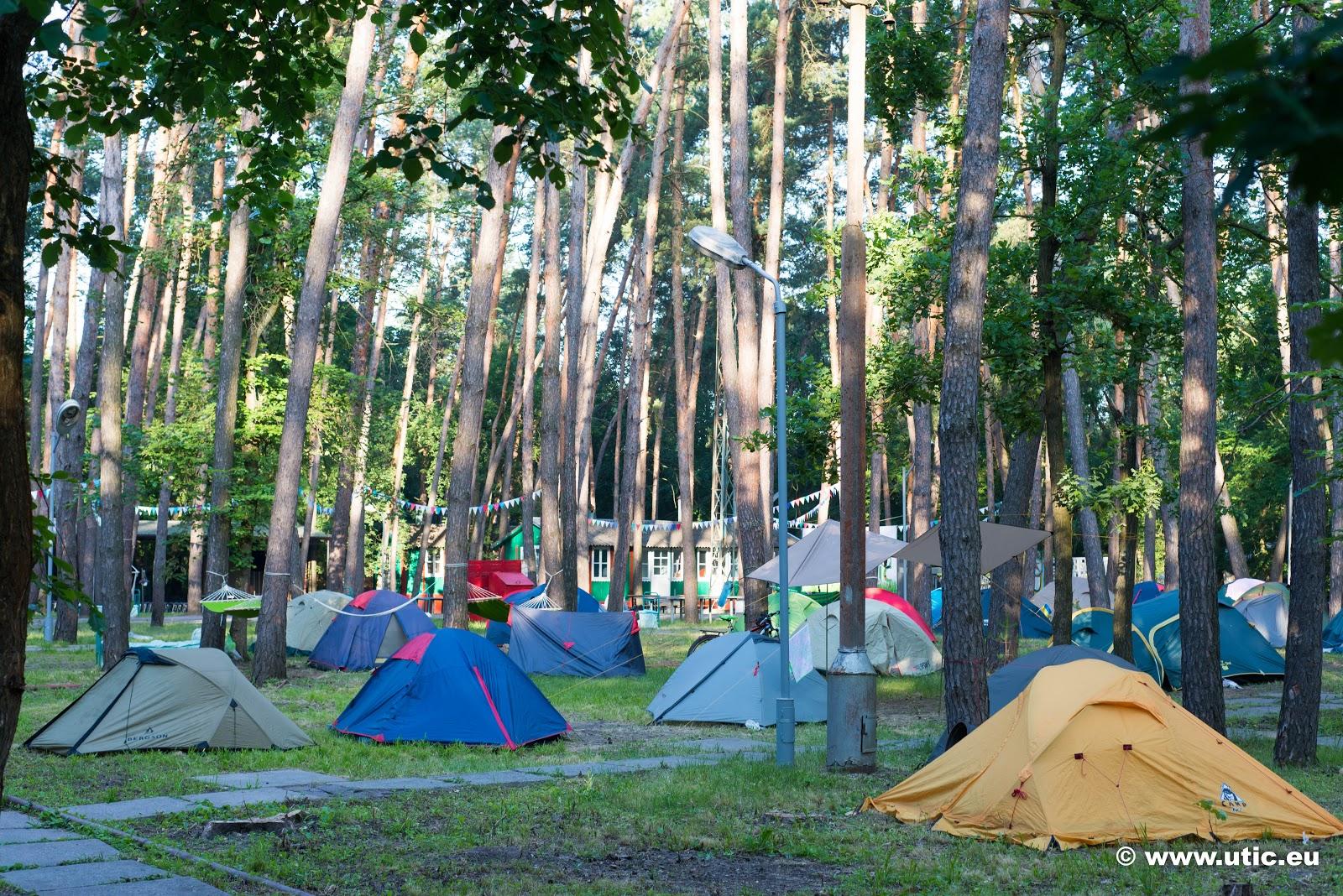 Some attendees and speakers at UTICamp-2016 enjoyed the opportunity to live in tents at the campsite; others opted for traditional accommodation in hotels, but even this option came with a unique experience – transportation to the venue by motorboat. An early morning yoga session was held by an attendee from India. Live birdsong during the day, swimming sessions in a clean river during the longer breaks and midnight campfires were just a few of the delights enjoyed by the participants in this open-air conference.

All these activities created a good atmosphere and backdrop for acquiring new information from speeches by language professionals and productive networking with colleagues from all over the world.

Striving to remain objective in our account of the event, we decided to address a couple of questions to UTICamp’s keynote speakers: Hans Fenstermacher and Kimmo Rossi.

The initial reaction by Mr.Fenstermacher, Director of Corporate Development at United Language Group, on being invited to speak somewhere in the Ukrainian woods was the single word: “Varenyky!” (a traditional Ukrainian dish). He commented on the organization of UTICamp as follows: “The setting was rustic, but very comfortable, with lots of fresh air and fresh vegetables”.

Kimmo Rossi, Head of the Research & Innovation Sector at DG CONNECT (European Commission), said that the campsite had been well restored and found the beauty of the riverside to be really impressive. Neither speaker could believe the camp had been renovated in such a short time. 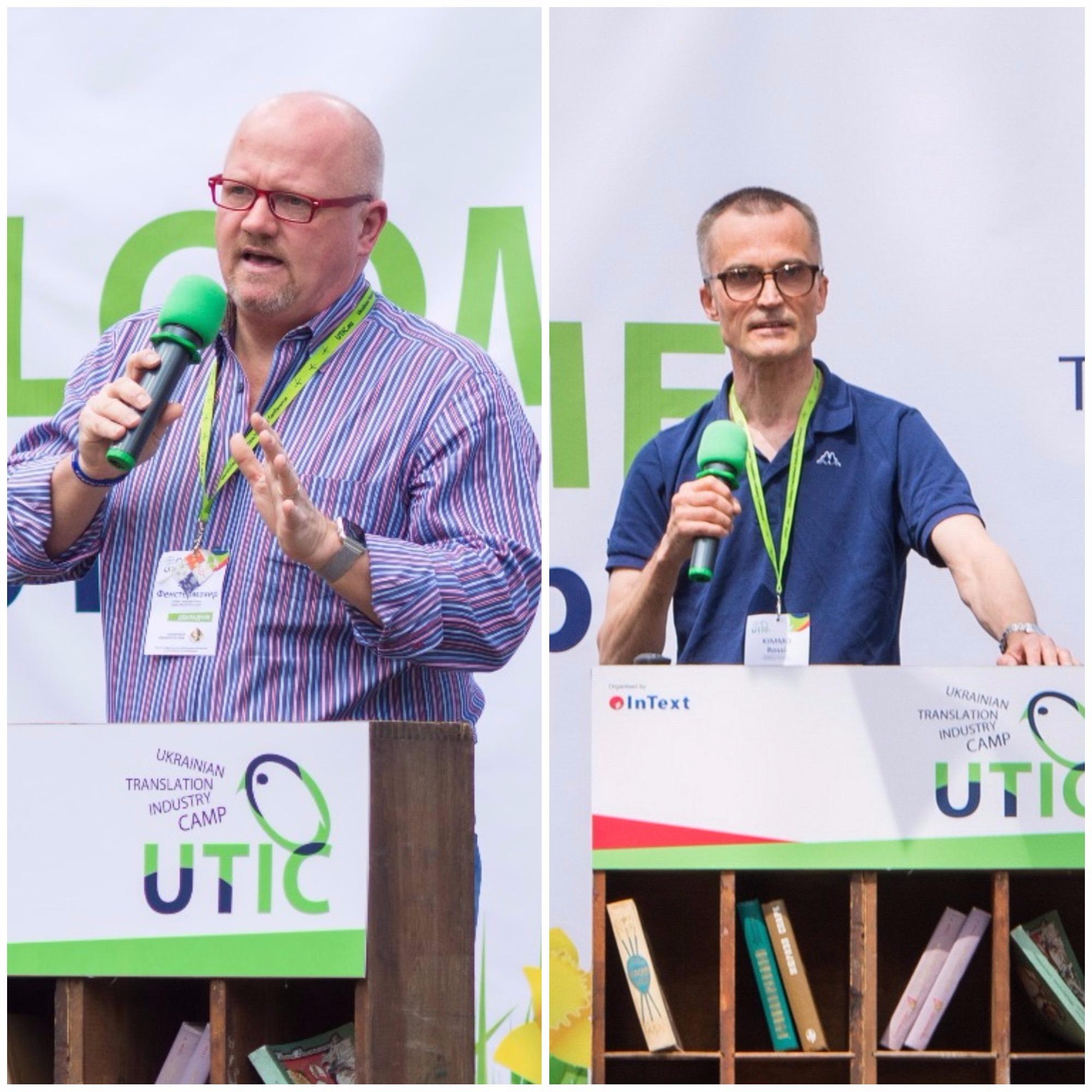 In his speech at the opening ceremony Mr. Hans Fenstermacher talked about where ‘Homo Linguisticus’ man could be found. Mr. Kimmo Rossi spoke about translation in the future and the future of translation

But it was not just the brand new format and the venue that attracted participants to UTICamp. The conference agenda covered key aspects of the translation industry, with its Art of Translation, Translation Technologies and Localization, and Business of Translation streams.

The presentations by speakers in the Art stream covered the work of in-house translators and freelancers, oral and written translation, translating fiction and negotiations, and working in international organizations. The attendees were particularly pleased by the large number of practical presentations containing valuable advice that they could put into practice immediately.

The Translation Technologies and Localization stream was largely devoted to translation quality and the software used to achieve it.

Speakers in the Business of Translation section talked about managing translation agencies, company promotion and sales, and staff training. 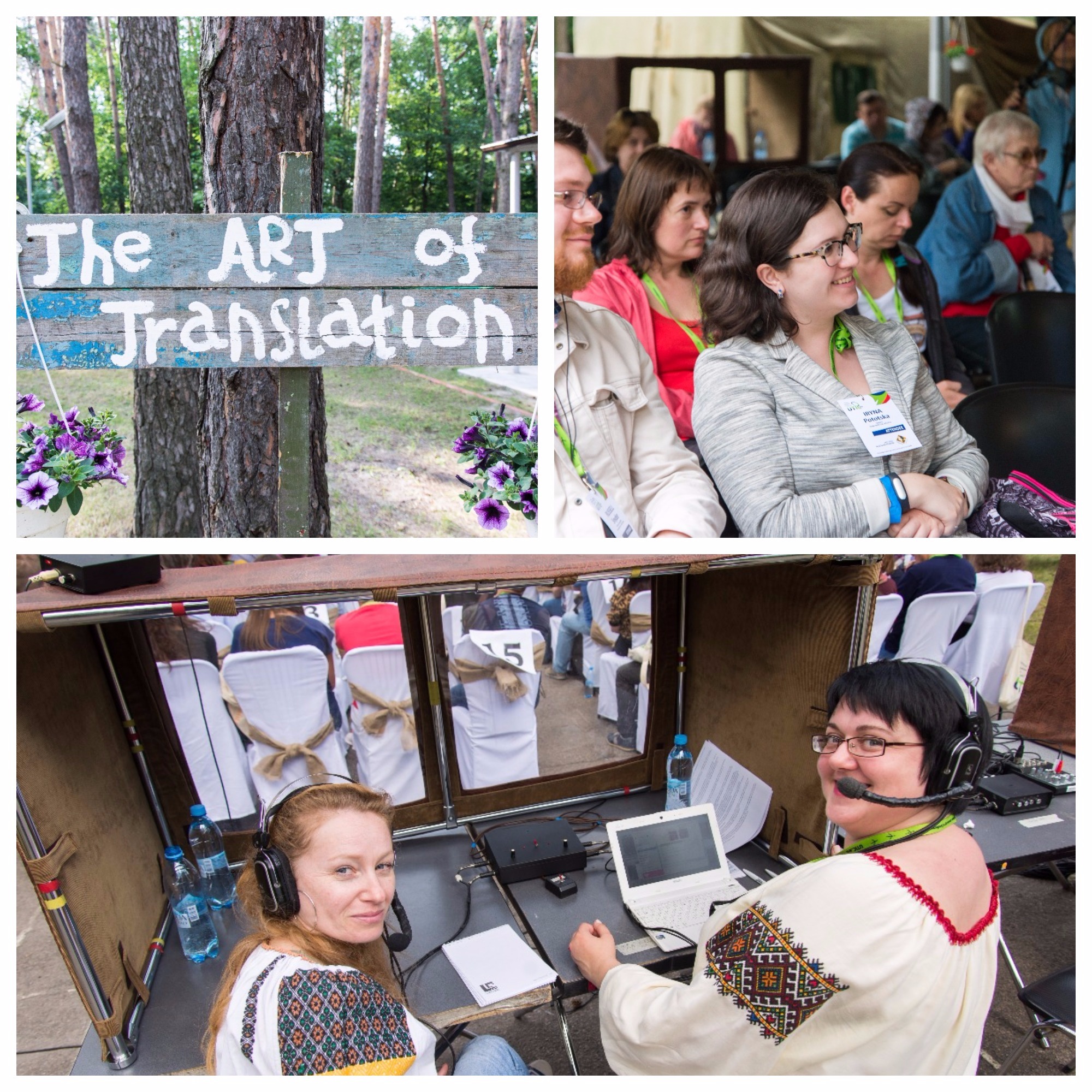 The ‘Art of Translation’ section brought together creative linguists who learned how to turn a translation into a masterpiece. Our interpreters in national clothing helped the attendees to understand all the speeches

The conference brought together a large number of professionals, many of them from Ukraine. So what did our esteemed guests think of the Ukrainian translation industry?

According to Mr.Fenstermacher, who has been in the language industry for over 30 years and knows a lot about the various translation communities around the world, Ukraine has one of the most vibrant he has ever seen. Of course, it is less "advanced" compared to top commercial companies in Western Europe or North America, but the entrepreneurs and linguists seem to be just as enthusiastic and solution-oriented.

Mr. Rossi noted that the Ukrainian translation industry is dominated by a couple of youthful and innovative companies and a large number of skilled self-employed translators, who can offer services at very competitive prices. He believes it is important for the Ukrainian community “to fight the problems of fragmentation and to be able to meet the demands of all customers”, while remaining optimistic about its future.

It goes without saying that any industry event can boost your expertise and enlarge your partner portfolio. But what are the specific benefits of attending a conference in Ukraine? Why is there a growing trend towards going east and exploring potential emerging markets?

Ukraine offers a genuine opportunity to develop and expand your business. Companies in the translation industry can benefit from well-trained, educated and English-speaking personnel, as many prominent international IT companies have already been doing for the last decade. Employees with various specialties, such as project managers, linguists, translators etc. and with the same cultural outlook can be recruited for relatively moderate salaries compared to the countries of the EU, thanks to Ukraine’s status as an emerging economy. At the same time, Ukraine-based offices can operate on a daily basis within standard European working hours, which gives Ukraine a huge and distinctive advantage over its Asian competitors. This didn’t escape Hans Fenstermacher, who found everyone “very committed to the work, engaged and interested in growing and learning”. 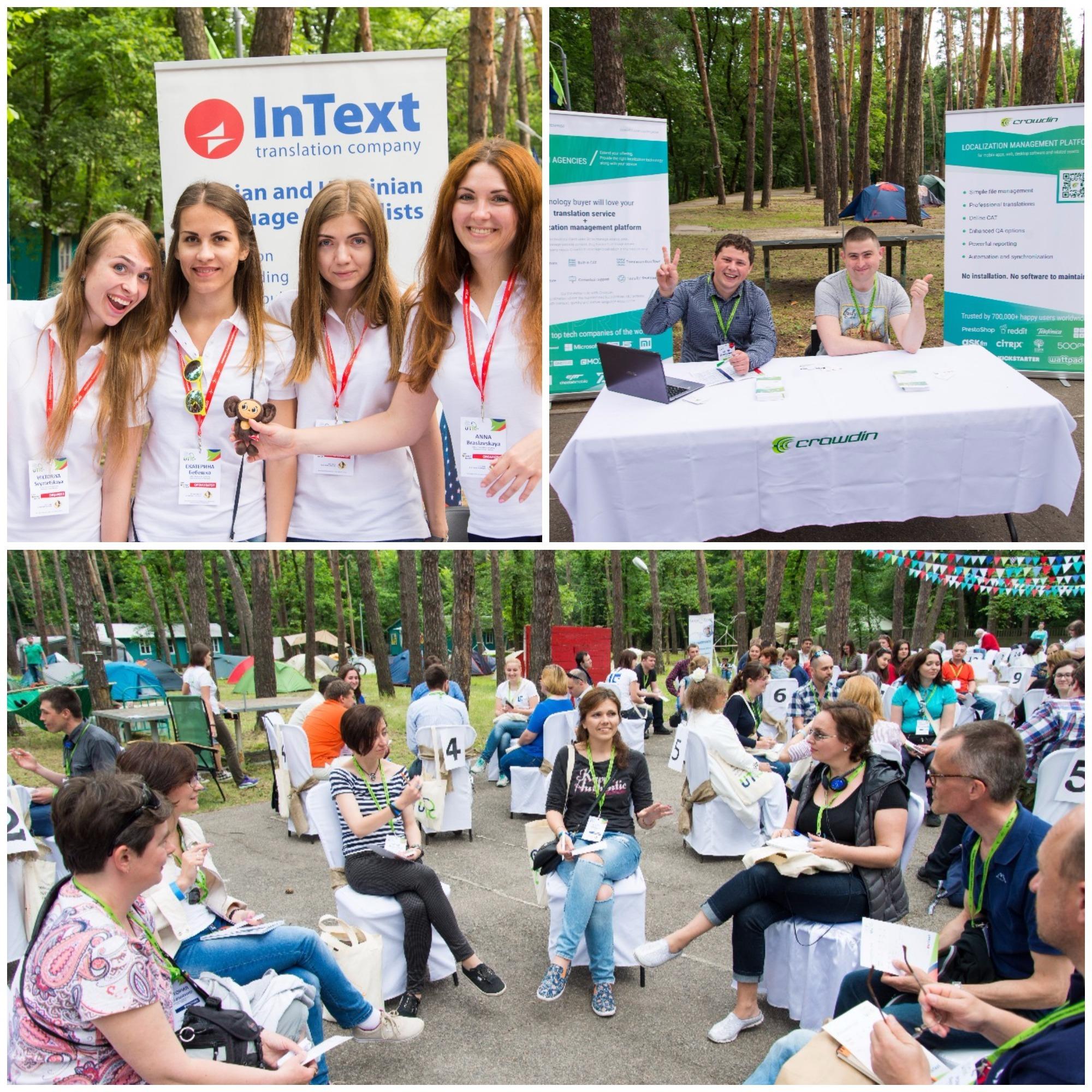 A platform for effective networking and company presentations

How did InText cope with such a challenging event?

InText Translation Company, as one of the key players on the Ukrainian translation market and the lead organizer of the UTICamp, together with its peers and colleagues, is open for fruitful and mutually beneficial cooperation with companies from all over the world. Contacts already established only confirm the reliability of Ukrainian companies as business partners.

Last summer, back at the conference in Meteorite, Hans Fenstermacher noted: “The hosts are dedicated to making the event engaging and productive”. And Kimmo Rossi mentioned that due through the hard work of the organizing team and the commitment of all the speakers and participants, “the UTICamp has the potential to develop to a more international event” and “to offer really unique features of adventure and peace of nature, while the facilities (e.g. simultaneous interpreting and streaming of virtual participants and speakers) worked perfectly”.

UTICamp feedback shows clearly that the conference was incredibly well received. And its extraordinary venue was at the heart of its success.

On closing the event, Stanislav Kalenyuk thanked the entire InText team “…and our spouses for their great patience!” during the long UTICamp preparation phase. And the warmest thanks were addressed to all participants who made the conference even more attractive by bringing a part of their countries and cultures with them to create a unique UTICamp spirit in the Ukrainian woods.

For a taste of the UTICamp atmosphere, we kindly invite you to subscribe to UTICamp YouTube channel, where most of the recorded presentations have already been posted, or to browse the colorful photos of the event on our website or Flickr account. To learn more about InText and the team behind the project, click here. 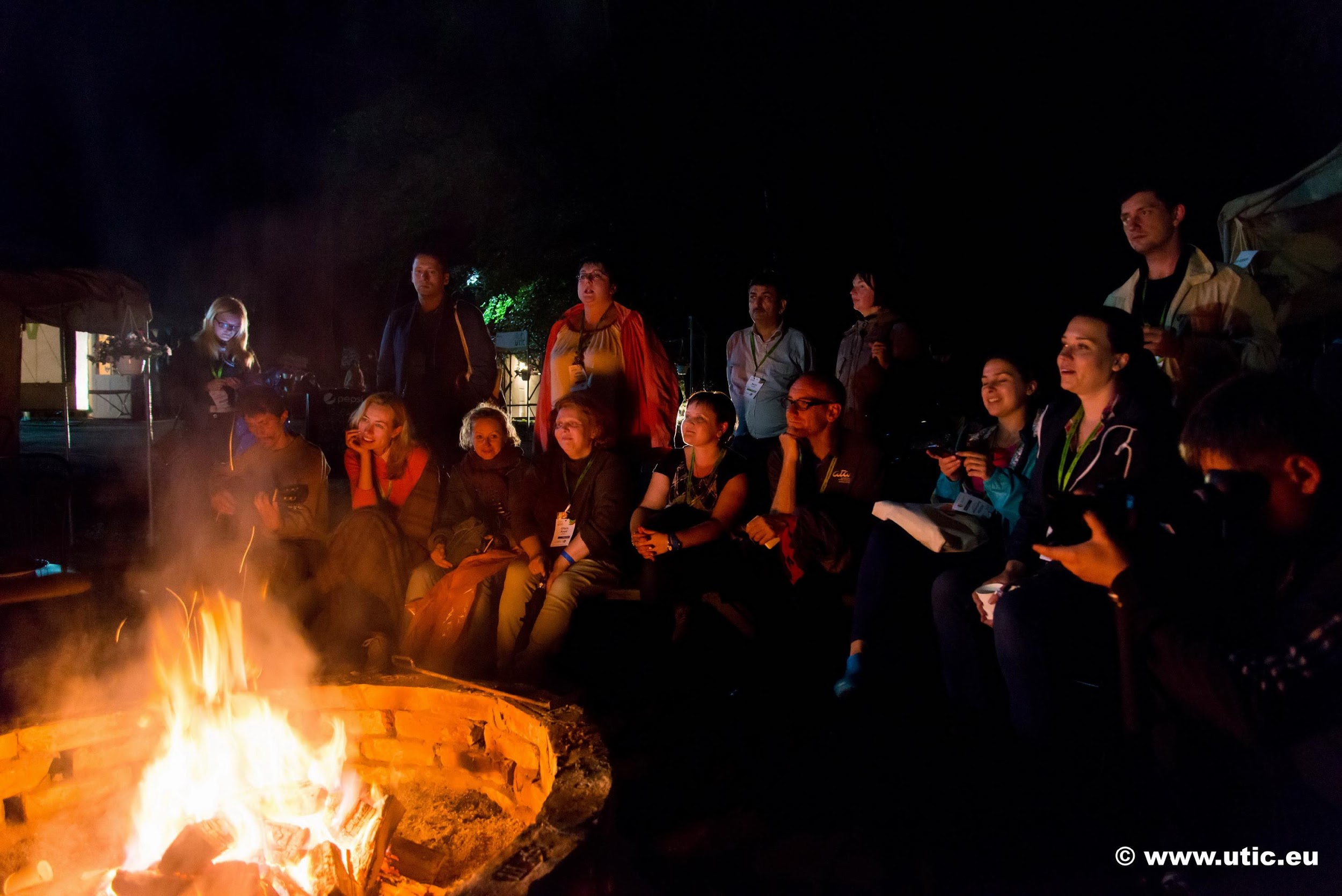 UTICamp-2016 is over, but we are looking forward to gathering the attendees around a campfire at our next event!